I recently made a request to have a volunteer take a picture of my great grandfather's grave marker on www.findagrave.com, and right away Jo accepted the request and fulfilled it! Thanks Jo! Click here to see the FindAGrave memorial page for William Henry Carothers. 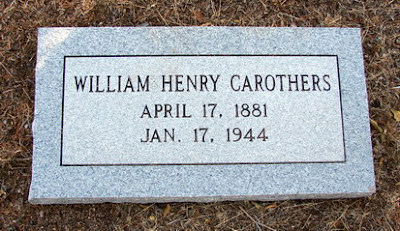 I have received the book mentioned in this post. Kudos to the Jackson County Genealogical Society for sending it so fast! Not to mention compiling the information in the first place!

There are two Carothers listed in the Lutes/Ermy Cemetery as follows:

Annie and Nathan are burried on the same row in the cemetery. Only 3 people are listed as buried in that row, the other, George W. Hashman, listed as being buried between them. Of course, there are likely numerous unmarked graves in the row.

As there are numerous Hashman's buried nearby, I think it is safe to say that Annie's maiden name is Hashman. So, which Carothers was Annie married too? Nathan? He is 9 year younger than her. Is Nathan and in law?

I need to look through the related names in this area and check for them.

A quick check on FindAGrave.com yields a picture of Annie and Nathan's grave stones, and more information about them. The person who posted Nathan's info added this:

Only the date of Oct 20, 1868 on stone that has fallen and lying against base.
My family records show Nathan born 1868 and died 1943.
The son of James Carothers and Martha Jane Bailey. 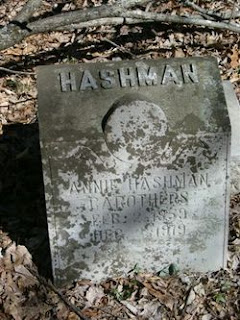 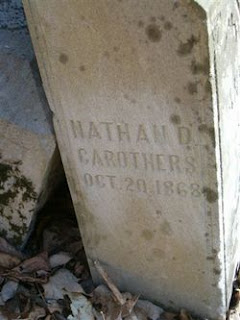 Unfortunately, Inter Library Loan does not include genealogical material, so I could not get the book mentioned in my previous post. Although the Jackson County Library has offered to send me pages copied from the book, I think I will purchase an updated version of the book from the Jackson County Genealogical Society. The check, as they say, is in the mail first thing in the morning. As you never know where new information will lead, I prefer to have the entire book to look through. The price is not bad. I tried the ILL first as I had good luck with it in the past, but the book in question was classified as history, therefore I was able to get it through ILL.

I need to look up more information on Morris and his wives in Illinois. There has to be more information in local sources. Oh, to be independently wealthy so I could travel around and do research!
Posted by Don at 8:59 PM No comments:

Yesterday, I requested an Inter Library Loan from my local library for a book entitled, "Jackson County Cemeteries", volume 9, "Salt Creek Township", which contains was compiled by the Jackson County Genealogical Society. It was published in 1989. It should arrive in a couple of weeks.

I am hoping to locate information about William Carothers, his wife, Mary, their children and relations in the area. William and Mary may have died and are buried in this area.
Posted by Don at 9:31 AM No comments:

The marriage of Morris Carothers to Diadima Mitchell, in Lawrence County, May 14, 1831. Diadema was previously married to a man surnamed Mitchell with who she had two children, Abraham and Josiah. Her maiden name was Connelly.

The marriage of William Carothers to Nancy G. Hudson, in Lawrence County, September 4, 1844, is likely either William, a son of Morris from his first marriage, or William, a brother of Morris.

The marriage of Polly Carothers to Major Cummins, in Jackson County, November 19, 1833, is likely Polly, sister of Morris.

I have added entries for Edgar Eric Rux and Edith Hazel Rux (Carothers) at www.findagrave.com. Edith is a distant cousin of mine. We share Clark and Rachel Carothers as a common ancestor. I'm always amazed at all my Carothers cousins who lived in California long before my parents moved here!
Posted by Don at 7:53 PM No comments: A nice photo of the Oak Grove Cemetery, in Fort Scott, Kansas, has been posted on the www.findagrave.com website.

My great grandmother Myrtle Elizabeth Herring is buried there.

Life has kept me busy and away from genealogy for a few months, but I think I'm back now!
Posted by Don at 6:37 PM 1 comment: