The City of Mesa Public Library came through in response to my request for the following obituaries:

Friends may call from 10 a.m. to 1 p.m. today at Hampton Funeral Home, 240 S. Cortez, Prescott. Services will be at 2 p.m. today at Arizona Pioneer Cemetery on Iron Springs Road in Prescott.

Services tentatively have been set for 10 a.m. Wednesday in Brazill-Whitney Mortuary. Burial will be in Resthaven Park.

Mr. Nelson, born in Prescott, lived at Crown King for more than 30 years. He was a veteran of World War I. He was associated with his grandfather, the late George P.
Harrington, in the development of the Philadelphia Mine at Crown King.

Later, he worked as a mill man for other mining companies in the Bradshaw Mountain area, including the Swastika and Golden Turkey.

This post records how I found the sources for John and Vivian's obituaries.

Regarding Martha Jane Stewart (Nelson), there are four children born in Howard County, Texas to a Donald Ray Stewart and Martha Jane Nelson. La Mesa, Texas is in Dawson County, Texas, but Dawson and Howard counties are adjoining each other.

In response to an obituary lookup request for John David Nelson I made this morning on an Ancestry.com message board, a very nice volunteer, provided the following:

Mr. Nelson was born and reared in the Crown King area, where he resided until 1966. He was a great-grandson of the late George P. Harrington, who was the founder of the Crown King and Phil mines. He had several mining claims in that area.

He was a Navy veteran of World War II. He had been employed by the Grant Tile Co. of Prescott for the past 10 years.

---
NOTE The newspaper obituary states he was born in Crown King however his birth certificate at: http://genealogy.az.gov/lists his birth location in Maricopa County.

This is from 33 years ago, but provides the names of John's family members, and confirms that his mother is Vivian F. Nelson. I can now track down John's children, who are the great-grandchildren of Ella Tewksbury, sister to Lucretia Carothers. It is my hope they can shed some light on Lucretia, because as far as I know, she has no descendants.

To learn about the George P. Harrington mentioned in this obituary, check at the Crown King, Arizona website.
Posted by Don at 7:44 PM No comments:

I have requested an obituary lookup from the City of Mesa Library for John and Vivian Nelson.
Posted by Don at 7:18 AM No comments:

Well, I was hoping for more info!
Posted by Don at 8:26 AM No comments:

Hmmm... If this is the same Charly, it would seem Ella and Charly divorced, and she ended up in Arizona, while Charly stayed on in Tennessee.
Posted by Don at 9:20 PM 1 comment:

In my continuing quest to learn more about Bertha Lucretia Redwine, 2nd wife of William Henry Carothers, I am researching the descendents of her siblings, as they are likely to have some pictures of her, if not some knowledge of her.

In previous posts, I've mentioned Lucretia's sister EllaTewksbury who had a daughter named Vivian Frances Yount. Vivian married John Hugh Nelson, and later died and was buried in Prescott. Looking in the Arizona online birth certificates, I found one child of John and Vivian. His name is John David Nelson.

This would appear to be John David Nelson, as the birth date matches and the locations match.

From the same source, there is also a birth certificate for John Hugh Nelson. This lists John Hugh as being born on Sep 8, 1896, and lists his parents as John Nelson, 32, born in Stockholm, Sweden, and Esther Rebecca Harrington, 22, born in Taylorville, Illinois.

The same source lists an obituary for Vivian:

The Illinois Trails website lists an Morris Carothers and his wife, Dedimiah, as being buried in the Connelly Cemetery in Parker Township, Clark County, Illinois.

The Illinois Trails website also lists an A. J. Carothers buried in the Good Hope Cemetery in Westfield Township, Clark County, Illinois. This is a good match for Andrew Jackson Carothers, a younger brother of Clark Carothers.

Grandpa Gerry on the Racetrack!

Below is one photo from Aunt Lana's collection that I found quite interesting. I don't know where or what year this photo was taken, but Gerry's cousin Gordon Herring, and his nephew, Bob Herring, spent many years on the racetrack. This is the first I've learned of Grandpa Gerry being on a racetrack. I'd love to know the backstory on his being on the racetrack. In any case, it's a fun photo! 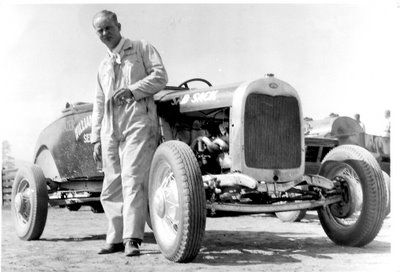 Update July 3, 2006: This picture must have been taken sometime in the 1940s, likely in Prescott, AZ. My dad remembers Gerald racing. Gerald's wife Mabel mentioned that she was always concerned when Pops was racing in Prescott. I would like to know how Gerald got involved in racing as his cousin Gordon Herring was into racing big time, and died in a racing accident. Also, Gordon's son Bob also was into racing as well. There must be something in the Herring blood as several of Gerald's descendants also lean toward speed and racing.
Posted by Don at 8:49 PM 1 comment:

A Visit from Aunt Lana

Today Aunt Lana came to my home with a box full of family photos. Some are over a hundred years old! She and her mother were kind enough to leave them in my care to scan them. There are so many photos to scan, I will do an inventory of them first. I need to scan them quickly and return them. I want to return them to their owners as soon as possible. They are are priceless family photos. There are many pictures of individuals I don't even have a photo of yet! There are many photos of my grandfather Gerald and his parents at just about every stage of life from toddler to old age. There are many, many photos of the Herrings, from whom I descend. As well as many photos of various Uncles, Aunts and cousins. I would guess that Aunt Della gave her photos to Gerald, and some are from Gerald's dad, William Henry.

Once I have scanned the photos I will create some CDs of them to share with the rest of the family. I'm sure there are many photos that many of them have never seen. It will be quite a treat!
Posted by Don at 7:25 PM No comments:

The full index for the 1910 to 1955 database is available, but images are only available from 1910 to 1920. More images will be added, and copies for those not availabe online can be requested.

I located a death certificate for Joseph Jennings Carothers. He was buried in the Carrsville Cemetery. I added an entry for Joseph at the Find A Grave website.

The names of 50 individuals with the surname Carothers appear in the database, including several in Henry County: Rachel(l), Andrew, Joseph, and Polly. I'll have to examine all of them in more detail in the future!
Posted by Don at 12:53 PM No comments: