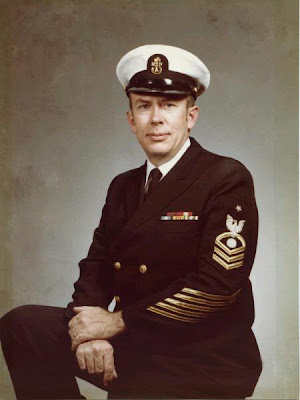 Edwin William Carothers, 72, passed away surrounded by family at Sharp Memorial Hospital, San Diego, after an extended illness. Edwin was born on December 9, 1937 in Prescott, AZ, to Gerald Carothers and Dixie Black. After graduating from Monticello H.S. (UT), he enlisted in the U.S. Navy and served his country for 24 years. As an Electrician's Mate, he traveled the world, from Antarctica to Vietnam, earning five medals and achieving the rank of Senior Chief. He then worked in the Civil Service for 20 years. In 1961, he married Linda Wynn in Pocatello, ID. They were married for 49 years and raised four children. Edwin had a strong love of learning and reading; he also loved his family, his dogs and the Cub Scouts, in which he volunteered as Cub Master for ten years. He believed in Jesus Christ as his Savior. He was preceded by his parents, his brother Wade and a sister Ruth. Surviving are his wife, Linda; his children Kelly, Donald, Lori and Guy; eleven grandchildren; and sisters Lana, Kathy, Lynda and Elaine. A memorial service will be held at Fort Rosecrans National Cemetery on August 26th, at 11:00 a.m. Please, no flowers.