[Source: A History of Tennessee and Tennesseans: The Leaders..." Vol 3, By Will Thomas Hale, Dixon Lanier Merritt; pub 1913]

Williamson County (formed in 1799 from Davidson): Previous to 1800 settlers began coming to what is now Williamson county. David McEwin, with several families, arrived in Nashville in 1796, but as there were still fears of Indian disturbances in remote settlements, they remained in that village until 1798, when McEwin, if not others, located at Roper's Knob. It was about this time that William, a son of Timothy Demonbruen, left Nashville and settled at College Grove, where he became a wealthy planter. A man named Sledge settled near the present Peytonsville. From 1797 to 1810 the following persons were among the county's pioneers: Samuel Crockett, John Aulson, Andrew Goff, George Neely, Thomas H. Perkins, Mathew Johnson, William Edmondson, Ewen Cameron, Thomas McKay, Abram Maury, Solomon Brent, William Hulmey, Zion Hunt, Robert Caruthers, R. P. Currin, John Harness, Edmund Wall, Byrd Bramlett, Nicholas Perkins and Stephen Childress. Byrd Bramlett, settling near Nolensville, grew the first hogs- head of tobacco in Middle Tennessee, tradition says.

http://genealogytrails.com/tenn/williamson/history_early.html
Posted by Don at 9:32 PM No comments:

Carothers Family Historical marker in Franklin, Tennessee
"Robert Carothers, Sr., a Revolutionary War soldier, and his family came to Tennessee from North Carolina in 1791 and were living in Williamson County in 1799. His son James, a War of 1812 veteran, became a prosperous landowner well-known for his nearby Pleasant Exchange Plantation. Robert Carothers, Jr. and his family owned land adjacent to this marker. James' son, Thomas Jefferson Carothers, was a Confederate soldier. James sold his two-story log house to another son, Robert Blake Carothers, who enlarged it. Owned by the Carothers family almost fifty years, this historic Cool Springs House was moved in 1993 from Franklin to Crockett Park in Brentwood."
Location. 35° 56.891′ N, 86° 48.446′ W. Marker is in Franklin, Tennessee, in Williamson County. Marker is at the intersection of Carothers Parkway and Corporate Centre 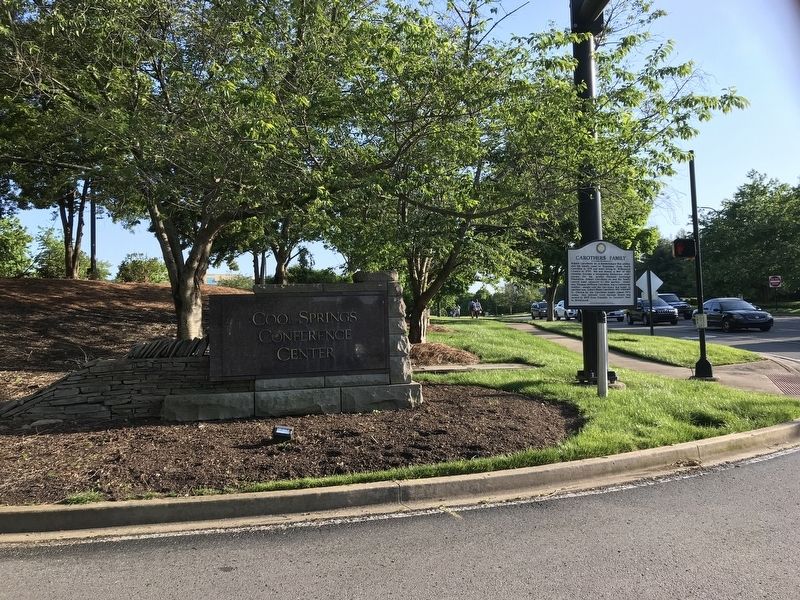 By Duane and Tracy Marsteller, May 9, 2020
Drive, on the right when traveling north on Carothers Parkway.
Posted by Don at 10:59 PM No comments:

There is a record of William Carothers marriage to Sally Carothers in Williamson, Tennessee on Feb 6, 1808.  Cousins or married name used instead of maiden name?

There is a record of a Carothers Cemetery #1.

County Record Archives: https://rutherfordcountytn.gov/archives/links
Rutherford county is adjacent to Williamson County, Tennessee and there is a Carothers cemetery that is being examined and recovered by Kenneth Sawyer as it is on his property.
The Caruthers Cemetery Restoration Project
This cemetery is located in the Murfreesboro, Tennessee area.
This looks like the address: 1306 Atlas St, Murfreesboro, TN
http://rutherfordtnhistory.org/history-buried-too-long/