The Family Tree Legends California Births, 1905 - 1995, provided the following information that would appear to be the 3 daughters of Earl Lucas:

Some excerpts from the article are as follows:

Several guests from Modesto had unexpected reunions with former Modestans now living in Sacramento at the wedding uniting Cindy E. Lucas of Sacramento and Kenneth Allen Kolster of Roseville in marriage.

The bride and her parents, Mr. and Mrs. Earl L. Lucas, lived in Modesto until five years ago, when he accepted a spot in the State Controller's office. The bridegroom's parents are Mr. and Mrs. Frederick K. Kolster of Roseville.

The wedding was held in the garden of the Kolster home, which slopes into a natural ampitheater on the shore of Folsom Lake.

Diane Arnett of Modesto was maid of honor. Deneece and Susan Lucas, both sisters of the bride, and Donna Mittendorf were bridesmaids.

The wedding was on the 23rd anniversary of the bride's parents' wedding. ...
Posted by Don at 12:21 PM No comments:

The following was posted by Gary Kline in 1999 and it has information about his siblings and children. It could be helpful in locating Gary's wife Susan and their children.

Stephanie Meagan KLINE
Posted by Don at 12:56 PM No comments:

GDKskills Mon, 19 Jan 1998 13:32
I'm seeking information on my wife's ggg-grandmother, Hannah SUVER b. abt 1814-1828. Born and reared in OH. Married Morgan LYNN. They had a daughter, Mary Catherine LYNN who married Joseph Coffman BYERS. (His parents were John BYERS and Priscella PENDLETON, daughter of _______ PENDLETON, who is said to have served under Geo. Washington in the Revolutionary War.) In turn, Joseph and Mary Catheine had a daughter, Sallie Alice BYERS, b. 25 July 1864 near Kalamazoo MI. Hannah had several siblings, one of which was Joseph W. SUVER. He went on the California Gold Rush in 1848-49. Soon after, he went to OR where he had a family, lived part of the time near Corvallis OR (there is a town named Suver near Corvallis). In 1861, he still had relatives in OH to whom he wrote. The SUVER family is thought to be of Dutch descent. Interested in hearing from anyone researching these surnames.

The post was made by Gary D. Kline. I really wish we had got together while he was still alive. He passed away in 2002. I must try to get ahold of his wife, or children, again.

Gary provides names for the parents of Joseph and Mary in this post. 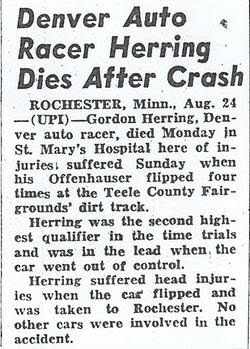 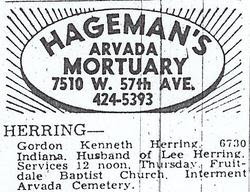 The name of Gordon's wife is listed as Lee Herring. Hageman's morturary in Arvada, Colorado should also have more information.


I found the following at a Jefferson, County website:

The name is descriptive of the location. The church was originally Clear Creek Valley Church organized in 1890. In 1892 the name was changed to Alathe Church. In 1905 the faltering congregation became a mission of Galilee Baptist, Denver, and was named Fruitdale Baptist, adopting the name of the neighborhood. In 1990 the centennial observance research led to the name change back to Clear Creek Valley Baptist Church. This is a conservative Baptist denomination and is the site of the Rocky Mountain Conservative Baptist Association headquarters.

I think the 6730 Indiana is Gordon's home address.