I have been trying to learn more about the wife of Gordon Kenneth Herring.  His wife's name is listed as Ella and she appears to have passed away a couple of years after Gordon.  It also appears she had remarried after Gordon passed away.  The following obituary lists Ella L. Walker as having a son named Robert Herring of Arvada, CO.  Her husband is Roy Walker.  Her mother is Mamie Stone of Pampa, Texas.  It gives her a birthdate of January 8, 1917 in Oklahoma.  It does not list the cause of her death. 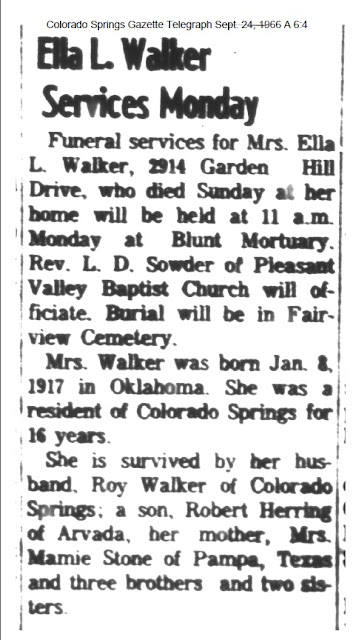 My thanks to the Pikes Peak Library District for sending the obituary free of charge.  It was sent as a PDF file via email.  I recommend the Pikes Peak Newsfinder power search if you are searching in the Colorado Springs area for genealogical records.  They have records back to 1872.
﻿

Gordon Herring, his wife Evelyn, living in Tucson, AZ in 1948 with his parents.

I have had some luck in the past finding ancestors and other family members being researched in phone directories.  In this case Gordon Kenneth Herring is found in the Tucson, Arizona City Directory of 1948.  Also found is his wife, Evelyn I.  Gordon is listed as involved in trucking.  Gordon and Evelyn are listed as living at 3115 E. Greenlee Rd.  Looking down a couple entries there is listed one M. M. Herring and his wife Bessie M. Herring at the same address.  This is Gordon's parents Melvin Marion Herring and Bessie Margaret Dinklage.